I’m on fire on my Evolution series! I’ll share with you today’s free pick in a bit But first, here’s an Evolution recap: I just won two more Evolution series on the {A} bets yesterday, bringing the current Evolution record to a perfect 11 Wins – 0 Losses! Click here to see proof.

Yesterday, I wagered a total of $21,963 on the two Evolution {A} bets, and ended up cashing out $31,813 for a net winning profit of +$9,850 on the Evolution series! See the picture below for proof of my Evolution betting tickets and winnings. How’s that for a payday? 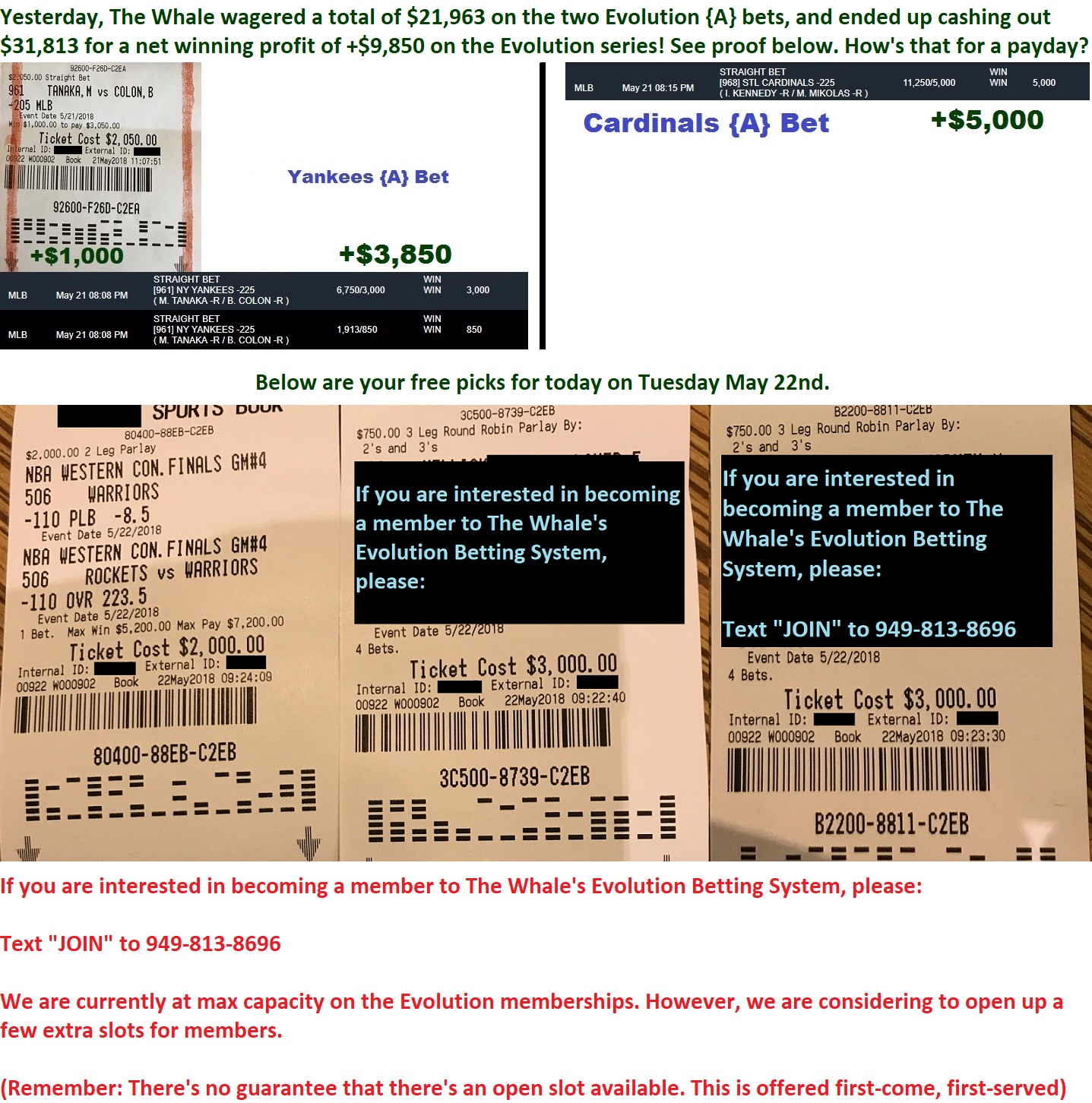 Here’s the full record of my Evolution Series Betting System so far this year:

Newsflash: There are 3 brand new Whale Evolution betting series starting today! If all goes well, I will win more than $50,000 overall on the Evolution series by tonight!

Want in? There’s a problem: We are currently at max capacity on The Whale’s Evolution Betting System.

BUT: We are considering opening up a few Evolution membership slots for subscribers to join. Membership slots are extremely limited, and I cannot guarantee that there’s one open for you.

We are currently at max capacity on the Evolution memberships. However, we are considering to open up a few extra slots for members.

(Remember: There’s no guarantee that there’s an open slot available. This is offered first-come, first-served)

Here’s how The Evolution system works: You start with a base amount on the {A} bet. If the {A} bet loses, it evolves higher to a {B} bet where you wager enough to recoup your loss on the {A} bet plus to win a profit. The same happens on the final {C} wager. You essentially wager enough to win on each subsequent bet to ensure a profit for the entire series. A betting series is considered over if the {C} bet loses.

The A-B-C progressive staking plan is exceptionally effective in Major League Baseball because teams always play in series of games against the same opponent. This gives the opportunity for a correlating series of outcomes that are ideal for a progressive A-B-C money management approach. This same betting strategy is the hallmark of one of the most successful and best-selling systems ever: The Exterminator Betting System.

There are 3 new Whale Evolution Series starting today. As always I will put my money where my mouth is by betting to win $5,000 on each series. Each series loss is a loss of around $100,000. I believe I‘ll win 49 out of every 50 series. That’s around $245,000 in winnings for every $100,000 in loss. As always, The Evolution Betting System and results are all documented for you at The Whale Tracker so you can see for yourself all the actual results.

So far, I have been paid out around $200,000 on these Evolution series plays. With 3 new series starting today, that could be another $15,000 in winnings by tonight. My mission is to show you that I can win a million dollars off the Evolution system, and to show it to you as it happens.

We are currently at max capacity on the Evolution memberships. However, we are considering to open up a few extra slots for members.

(Remember: There’s no guarantee that there’s an open slot available. This is offered first-come, first-served)

Here’s what I have to say to you today about the Evolution program:

“After the easy wins with the Cardinals and Yankees last night, we are now 11-0 since we officially started the Whale Evolution Series Betting System. The goal is to win 49 out of every 50 series creating consistently winning weeks, months, and seasons.

I am very careful on our selections looking at every possible angle very carefully. I liked the Nationals yesterday to bounce back off the bad series with the Dodgers and took them in the best bet round robin but did not take for the series because of the forecast for rain the next two days. That will likely make it only the one game last night. If it rains as expected, the series will only be one or two games, so I passed on the series bet and just took the Nationals for the game which won easily.

There are 3 new series bets starting today. They are all 3 game series. In the future, on 4 games series we may start the ABC series on game two if they set up well.”